The marching band season started the week after Labor Day. I shot events for Tournament of Bands and US Bands. I also spent a good bit of time photographing the Penncrest Roaring Lions Marching Band where my daughter plays clarinet in her senior year. So a football game every week and one or two competitions each weekend made for a busy fall. Here are a few of my favorite pictures from the marching band season.

The Monsignor Farrell High School is a 1-Open band who competes in the USBands circuit. Their show was "Sound & Fury of the Skies" and was basically about the weather. There were a number of props to convey the theme. The band is small and had just one guard member who was very captivating. It wasn't obvious to me until I saw them again that it was just one person doing all that guard work. Early in the season I was at a show in Delran NJ on a dark and rainy night. At one point the one guard member holds up an umbrella and happened to be positioned perfectly so that I could get this shot. The dark night made for a completely black background and the rainbow colors of the umbrella really stand out despite the difficult stadium lighting. 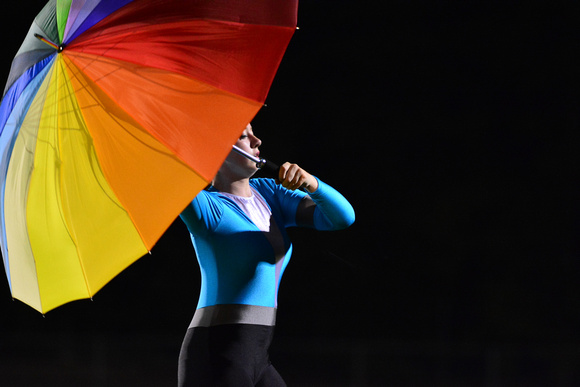 The Nazareth Area Blue Eagle Marching Band 2013 show was titled "Tales of Love: Triumph, Tragedy, and Trickery" and included music by Glinka, Puccini and Rossin. I always enjoy their shows and usually find a top picture from their band. This year the band hosted two competitions on October 12. At the show in the afternoon I was shooting through the pit and caught this flute player with a great blurred background as the back stands were filled with students who performed earlier. I really liked the composition and colors on this shot. 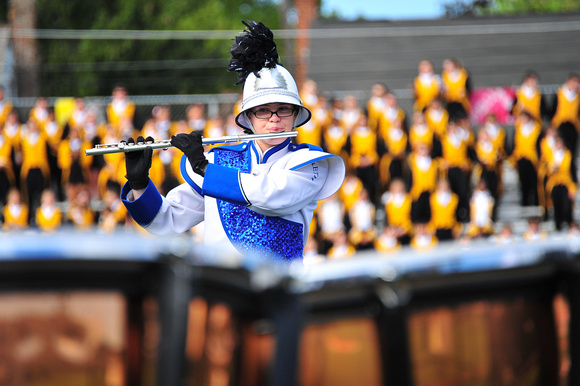 After the day show, I ended up leaving and going to a Cavalcade of Bands show where Penncrest was competing. I was supposed to stay at Nazareth but there were other photographers there and I wanted to see Penncrest. That turned out to be a good decision.

The most fun I had this fall was shooting at MetLife Stadium. The stadium was so interesting compared to most of the places I get to shoot. It was fun trying to capture the environment. I know many of the students will be excited to watch the Super Bowl this year and will say "I marched on that field." I tried to get pictures of each band that showed some part of Met Life that clearly identified the location. One of my favorite such shots was this one of Northern York. The guard member was on the podium and struck a pose perfectly positioned between the jumbotron and MefLife sign. I quickly switched to my second camera which had the 24-70 on it to get the shot. 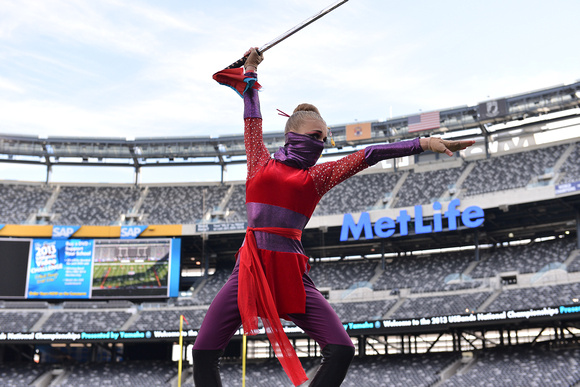 One of the great features of MetLife was the jumbotron. I tried to keep some awareness of what was being shown there and trying to use it creatively as background. There were several video cameras in operation, including a mobile one on the sidelines. I tried to keep an eye on where the field video camera was focused so that I could possibly find a shot where the video and the video subject were both in my shot. This shot of the Urbana High School Drum Major was the best of those shots as the video camera was right next to me focused on the drum major. 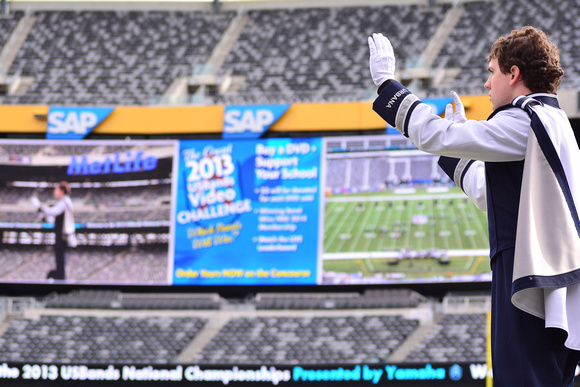