For the drum corps season I shot for Drum Corps International, Drum Corps Associates, Drum Corps World and my drum corps history website corpsreps.com. My travels took me to California, Texas, Indiana, New Jersey, Maryland and Pennsylvania. Over the course of the season, I was able to watch shows progress and see some exceptional performances. Here are just a few of my favorite pictures from the drum corps season.

There were many corps that were fun to shoot but none more than Blue Knights. The stunning guard costumes, unique marching style, acrobatic moves, a small stage and a giant blue ball - not to mention incredible performers - made for great pictures. The NoBeginningNoEnd theme carried through the music and visual presentation. While the great action provided opportunity for great shots, this shot was particularly fun because the performers were very aware that I was taking the picture. I walked down to the end zone, knelt down and made eye contact, then took the shot. I believe this was the first show (Minneapolis) they started this way with the giant ball carried in a sack onto the field. 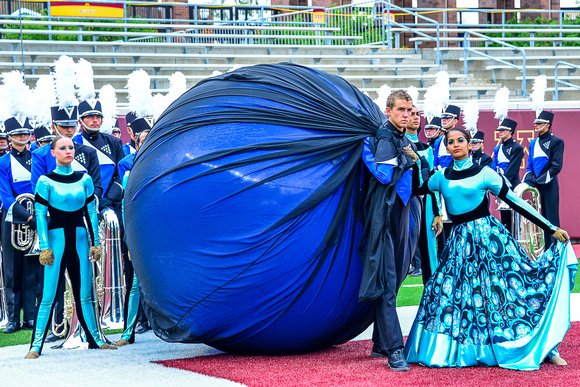 The Madison Scouts 2013 show "Corps of Brothers - 75 Years of Survival" included many interesting visual elements. Brass players using their horns as machine guns, a helicopter, the May You Never Walk Alone logs, the Drum Majors conducting the crowd in singing the corps song, a rotating company front and these two images. The first is a guard member walking across the snare drums. I got this shot several times from different angles including one straight on where I shot the whole sequence which you can find on Tumblr http://corpsreps.tumblr.com/post/57176043650/a-run-across-the-drums. This picture was from the DCI show in San Antonio. 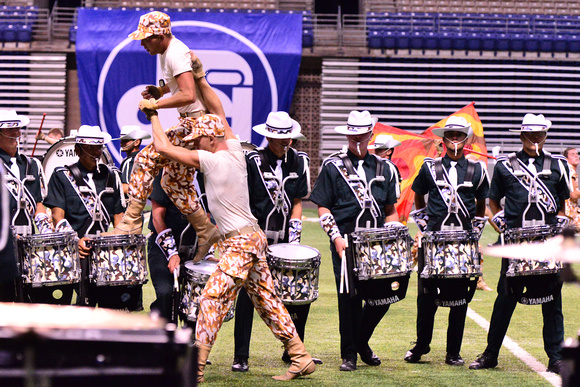 I found this image to be particularly striking as the fallen soldier is carried off by his friends as the corps plays May You Never Walk Alone with the crowd singing and corps alumni in the crowd standing for their corps song. It was a very powerful moment in the show. 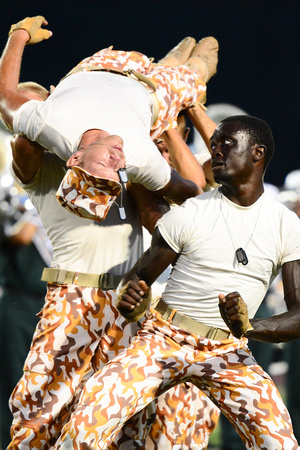 The Reilly Raiders are an alumni corps who perform in exhibition with a style reminiscent of the 1970s when I marched. At the West Chester show they performed their Irish themed show. As tribute to the Crossmen, the corps played Russian Christmas Music and invited several Crossmen legends to play with them. As the show concluded the Reilly Raider snare line was joined by a rather young man in uniform. As soon as I caught sight of him, I ran over to where he was and got down to eye level, and was ready to shoot when he struck this thoughtful pose. At the DCA Alumni show a month later, Brody came on the field with a snare drum and as soon as the photographers caught sight of him, we were all there taking his picture. He is a genuine photographer magnet. 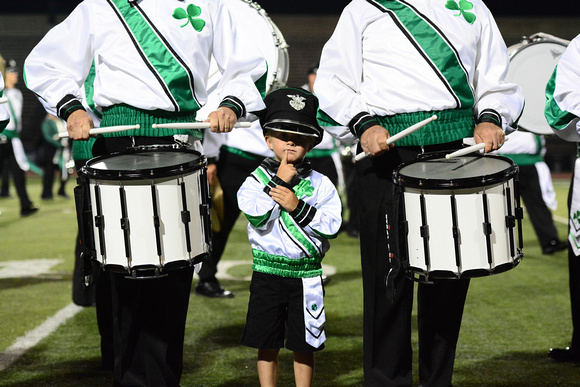 The Cadets "Side by Side" show made use of these large column props all season but mostly they were not having much impact - for me at least. At the West Chester show they found a way to create excitement with the props by having guard members climb and hang on them. Even better was the mellophone player who climbed up, played her closing solo and dropped her horn to the hands of a guard member below. The sequence of events took me a bit by surprise and though I did get a great shot of the soloist playing her horn, I did not get the horn drop. Two nights later at Allentown I was ready and caught the horn on its descent perfectly. 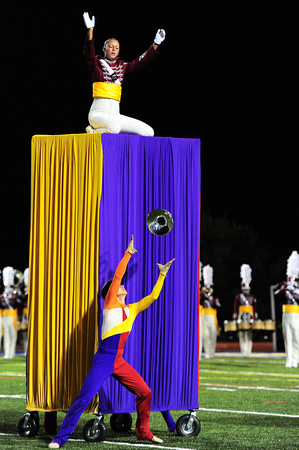