2014 was a good year for my photography pursuits. I had ample opportunities to photograph great performers and travel around the country over the summer. I sold some equipment I wasn't using or wanted to replace and added two new cameras (Nikon D750 and D810, though the D810 wasn't purchased until after marching band was over) and several new lenses (bought used on Ebay) including a Tokina 300mm that came from Japan. This blog post will discuss some of my very favorite pictures out of the 120,000 I took in 2014.

The indoor season began in January in Bedford PA and culminated at TIA Championships in Wildwood the first weekend of May. I was involved with the TIA Championship photography, so I took a trip down to Wildwood in April for a site visit with others on the photography team. I got there a little early and decided to walk down toward the beach along side the Convention Center when I thought to take out my camera and caught this view. 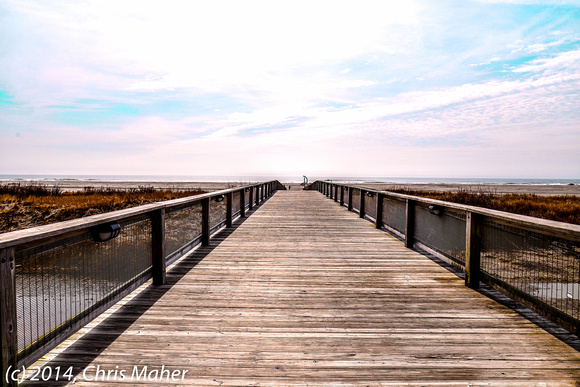 Top2014-1Wildwood view from the Convention Center, taken in April 2014

While the whole indoor season provided ample opportunity for great photos. the Wildwood event was particularly great because of the black backdrop and high quality of the performances. My clarinet/flute playing daughter Amanda decided to join the indoor drum line at Penncrest High School and I got this nice shot of her the week before Wildwood at the TIA Chapter 3 Championships in Avon Grove. 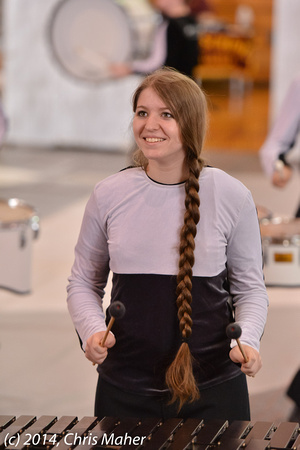 Top2014-2My daughter Amanda performing with the Penncrest Drumline. A woodwind player, she decided to participate in drumline for her senior year of high school.

One of my favorite performers to photograph is Brian Rosa, who is a guard instructor at Penncrest. Two photos of him made my top 100. This shot was captured at TIA Championships in Wildwood. I caught the same shot a few weeks earlier by simply reacting to the movement. I was pleased that I could remember when this moved happened and be focused on him at just the right moment. 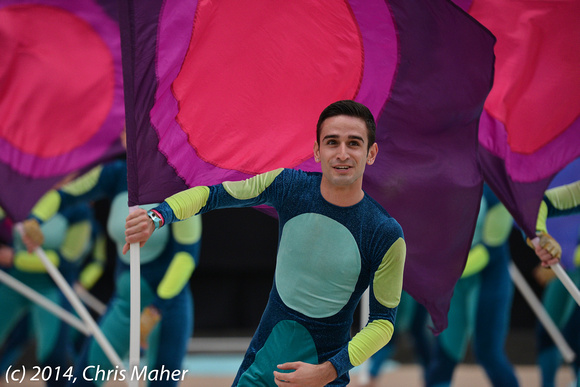 Top2014-3One of the guard instructors at Penncrest, Brian Rosa is a great performer. I caught this pose twice during the season.

My summer took me to 15 different states following the drum corps activity. Along the way I had other photography opportunities. For the third year in a row, I spent time in Yosemite National Park. Yosemite is a glorious place to spend time. I only had two days this year and tried to get to some parts of the park I had yet to visit. One of those areas was Mirror Lake. The walk to the lake was not terribly interesting, but was uphill and I wondered if it was going to be worth it. I got to a lake area and thought that was it. Took some pictures, but nothing special. Then I kept going ahead, past the crowds and walked right into THE view I was looking for. This shot is the background for my name tag at church. 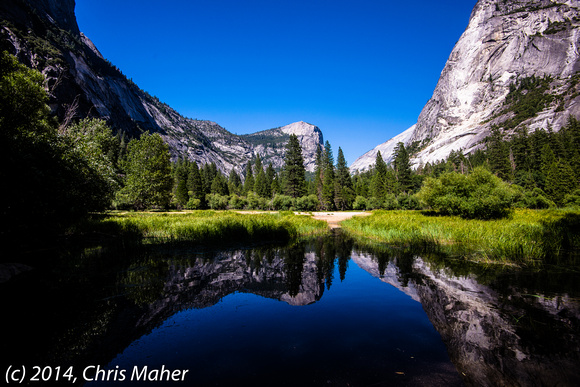 After Yosemite, I caught three drum corps shows and then had a few days to attend to work and to explore the San Francisco Bay area. For the first time I stayed north of San Francisco and crossed over the Golden Gate Bridge. On one outing, I took a ferry over to Angel Island and hiked around there. The island provide some great views of the bay. 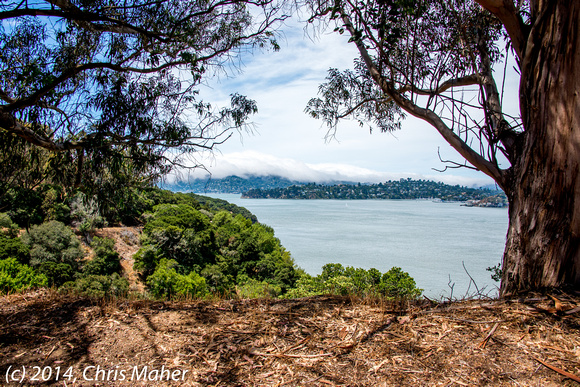 Top2014-5Spent a week in the San Francisco bay area in June and took the ferry to Angel Island. Spent hours walking through the island paths. Really loved this view of the bay.

The drum corps season ends with the Drum Corps Associates championships, which this year was in Rochester NY. Because this was the 50th anniversary for DCA, the schedule included participation in the Rochester Labor Day parade, which was a much bigger deal than I was expecting. They really take the Labor part of Labor Day seriously with several unions and civic groups participating. I was there to photograph the drum corps who were marching, but after the parade I took the opportunity to stroll around downtown. I had fun looking for picturesque views of the city like this one. 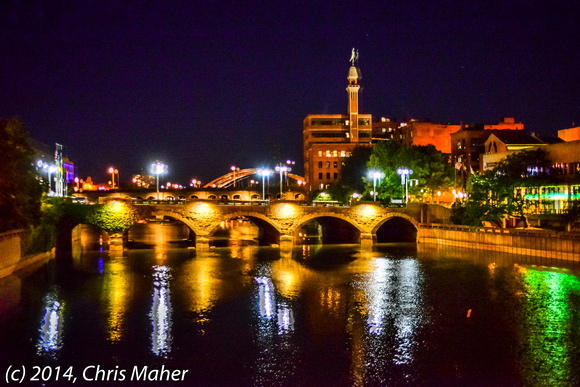 Top2014-8A view of Rochester at night. Not normally the kind of photography I do, so this was fun and memorable.

The drum corps season started in the middle of June and ended Labor Day weekend. Marching band started the weekend after Labor Day, though that first weekend was a rain out, and continued through the middle of November. I shot events 23 out of 26 weekends, only missing that rainy weekend, a weekend my wife in Jonesborough TN for the National Story Telling Festival (where I did put my camera to good use), and a church musician/songwriter weekend.

I enjoy trying to capture unusual action. While tossing members in the air isn't exactly novel, they can be tough to capture because it all happens so quickly. For the first several times I saw Crossmen I didn't even notice that there was a guard member being thrown in the air. I saw a photo taken by another photographer and started to look for when it happened. It took several more shows before I could get this shot of the "Jenny Toss" at the West Chester show. 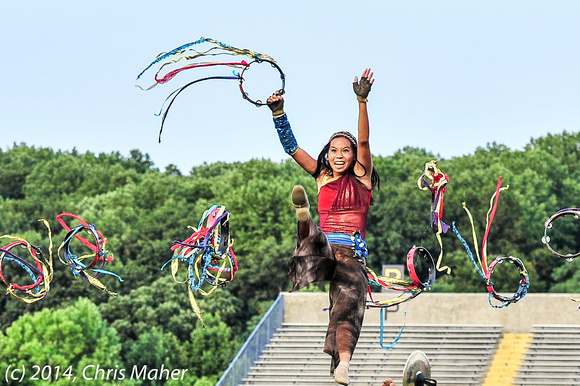 Top2014-6I saw pictures of this move from another photographer but completely missed seeing it happen the first half dozen times I saw the show. Finally got a good capture in West Chester. I'm told the move is called the Jenny Toss.

Fusion Core really stepped up the quality of their program this year. The guard and cymbals were both great to photograph. One particularly great move was this one where the guard member is rotating his body as he moves across the field. I saw him start to move and locked focus on his face and followed him to get this shot. 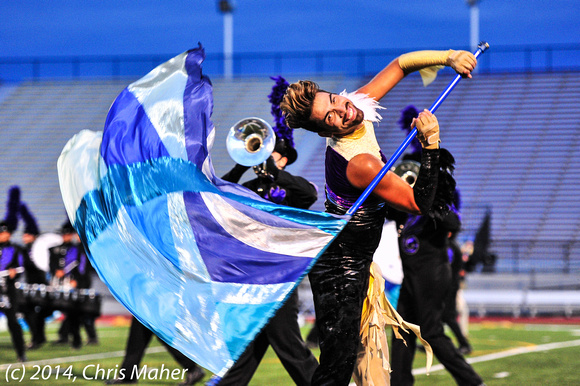 Top2014-7The position of the body, the facial expression, the colors - I loved everything about this shot. Fusion Core liked it so much they used it in their updated website.

My daughter's boyfriend, Alec Scully, marched in the Caballeros this summer. I got pretty good at spotting him on the field. In his first show of the season - his first show as a Caballero, I got a nice shot of him which I sent to Drum Corps World and which they published. At championships I caught this pose, which I hadn't noticed before. 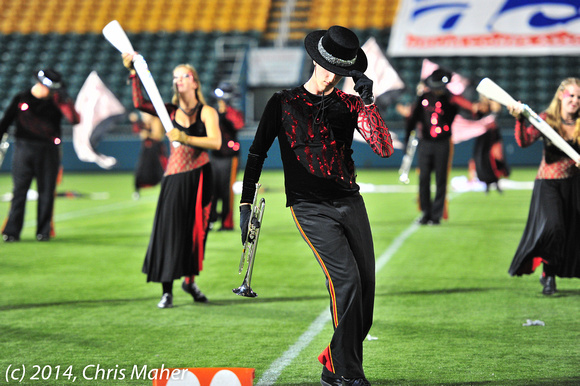 Top2014-9My daughter's boyfriend, Alec, in his first year with the Caballeros. I got pretty good spotting him on the field, but this shot was his favorite.

The final marching band show of the season was the US Bands National Championships at MetLife Stadium. MetLife is a wonder venue for photography. With really interesting backgrounds, large video screens, and great lighting, it is a fun place to spend a day with a camera, even when it is freezing cold. Of course as a national championship the performances are first rate. One of my favorite shows that day was Weehawken High School's rendition of Jesus Christ Superstar. JCS is quite an emotional show and Weehawken performed exceedingly well - they came in first in their class as I recall. I caught sight of the drum major who, like me, was crying. As I took her picture, she gave her band two thumbs up. It seemed a special moment between her and her band. It was an honor to observe it. This photo and memory still choke me up. 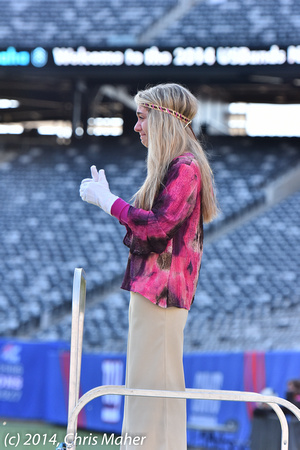 Top2014-10US Bands Open Class National Championships at MetLife - Weehawken was toward the end of a very emotional Jesus Christ Superstar show. I was in tears myself and caught the drum major giving her band an emotional two thumbs up. I still tear up looking at this shot.

So what does 2015 hold for my photography? Well, to start I am doing a 52 week photography challenge under the direction of artist, photographer and quilter Ricky Tims. I hope to use that opportunity to explore areas of photography I would not otherwise pursue. I'm working with Bill Ives to do photograph his drum corps collection of uniforms and other memorabilia for a special drum corps history project. That type of product photography is something new for me. I also have plans to learn Photoshop, which I'll need for both the challenge and Bill's collection. Finally, I hope to visit old and new venues for the marching arts.