My "Loved Ones" Photography Challenge.

I am participating in a 52 week photography challenge led by quilter and artist Ricky Tims. Each week we receive the challenge topic and lesson on Sunday morning and have until the following Sunday at midnight to submit one photo. On May 3 I checked the class website to see that the challenge was Loved Ones. May 3 was also the final day of the indoor colorguard and drumline season. I knew immediately what I wanted for my photo and had just one chance to get it in just a few hours. Before I get to the photo, there's background needed to understand why the photo of people unrelated to me and some of whose names I don't know are the subject of this photo challenge. 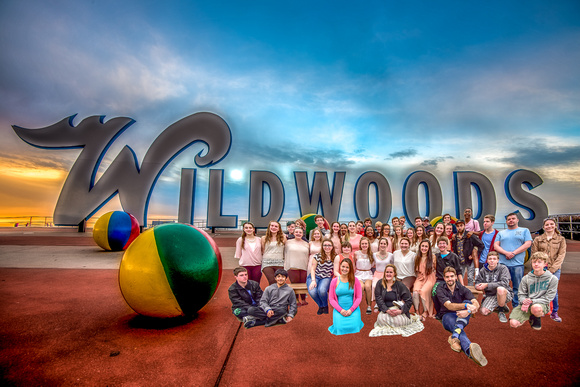 In 2004 I was on the marching band staff at Penncrest High School in Media PA. Late in the season we had a Saturday rehearsal. I was talking with a couple of the snare drummers who were bemoaning the fact that the season was coming to a close. I told them about the indoor activity and they were very excited. The band director agreed to let me start the program and I set about figuring out how to make that happen. I recruited my good friend Bill Ives who was also on the marching band staff and found another friend, Tony Perez, who agreed to write a show for us.

The first season was a learning experience but we had a successful start. I left the program in other hands after a few years. The program has changed hands a few times since and I am grateful to all those who have led the group for continuing what I started which I think has been very beneficial for the participants and the music program generally.

The colorguard program grew out of the drumline program so I feel somewhat responsible for its existence. Not only did the drumline pave the way for the Penncrest guard to participate in the indoor activity, but I helped connect the current director, Leighann Fields, to the school. I have been a fan of the guard and loved watching them grow the program. I spend a lot of time around this activity and hear so many positive comments about this group.

The drumline program this year was all original music written by the current director Tim Knowlton and portrays the story of Medusa. Five of the members are private students of my son who was a founding member of the group. Many are good friends of my younger daughter who participated in drumline for her senior year of high school in 2014. Primarily a woodwind player, she was really welcomed into the group.

The colorguard show was an emotional powerhouse. I cried from the first time I saw it in rehearsal to the final performance on Sunday May 3. The show was inspired by the story of Zach Sobiech who had osteosarcoma at age 14, a bone cancer. Rather than being defeated, he used his musical talents to tell a positive story, including writing the song Clouds that went viral on YouTube in 2012. Zach died a few months later.

So, back to the challenge. When I saw Loved Ones as the theme, I thought I have to get everyone from both programs together, but doing so was not going to be easy. Everything would have to fall into place. Both groups arrived at the Wildwood Convention Center since they each help the other to get onto and off the performance floor. Today was guard finals and they had to go through their warmups. I was at the Convention Center in the warmup area doing general photography for Tournament Indoor Association (the circuit running the competition) when they arrived. I took a number of candid shots and some posed shots but getting everyone together couldn't happen at that time. The group lined up to enter the performance venue and I went in with them.

The guard performance was outstanding. I followed them out and everyone was hugging and crying. The end of a season that started in November can be emotional under any circumstances, but after this particular performance the emotion couldn't be contained. I asked the guard director if I could get a group picture before they left the area. She helped me gather them. I spoke to them first to say how much I loved their show and how it made me cry from the first time I saw it. Then I called the drumline over. The staff joined in as well. It worked...I had everyone together.

After getting everyone in place, I told them that I was participating in a weekly photography challenge and the theme this week was loved ones and this would be my first shot for the theme.

So that is why a group of kids and their instructors, none of whom are related to me, are my loved ones for this challenge. 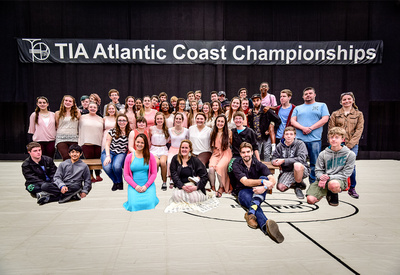 TIA Atlantic Coast Championships-On the performance floor for the TIA ACCs, the Penncrest Colorguard and Drumline.

(The actual photo was taken in the warm up area which had no good walls for background and things all over the place. When I got to work on the picture later I thought that it needed a better background. So I cut the group out of the photo and put it on a photo of the performance venue that I took earlier. Once I had a cutout of the group, I also played around with a lot of other backgrounds, putting them in fun locations in Wildwood. The photo chosen for the challenge used a shot of the iconic Wildwoods sign.)